How the Web Is Changing Us

A few weeks ago, American writer Nicholas Carr wrote a controversial article in the Atlantic Monthly. In his piece “Is Google Making Us Stupid?” he elaborated on an interesting hypothesis regarding the cognitive consequences of the web. Carr, a well-known critic of technological utopianism asked whether it could be that using the web slowly rewired people’s neuronal circuitry. He explains:

For more than a decade now, I’ve been spending a lot of time online, searching and surfing and sometimes adding to the great databases of the Internet (…). A few Google searches, some quick clicks on hyperlinks, and I’ve got the telltale fact or pithy quote I was after. Even when I’m not working, I’m as likely as not to be foraging in the Web’s info-thickets’ reading and writing e-mails, scanning headlines and blog posts, watching videos and listening to podcasts, or just tripping from link to link to link.

That is how most people navigate through the web. But, Carr argues, this constant flicking through the web gradually makes us loose the ability to delve into a text, to focus and deal with longer or more complicated reasoning and therefore to form a complex thought.
Drawing on historical examples, Carr explains that every technology bring about its own peculiar way of reflecting and apprehending outer reality. Maps changed the way humans think about space, mechanical clocks changed the way they conceive time. Mediums operate similarly: Print, radio and TV all “supply the stuff of thought, but they also shape the process of thought”.
Enter the internet. It integrates all those, mixing them and changing their nature according to its own interconnected structure. It becomes our single source of information, our only medium. It turns into the main, if not only, technological system by which we acquire knowledge. Th 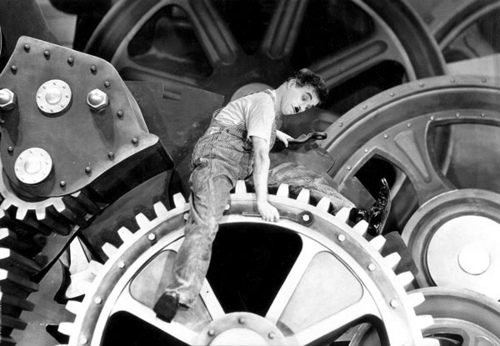 e cognitive change that we suffer becomes paramount.
Carr compares the logic the net imposes on us to taylorism. With taylorism he argues, man has been located within a technological frame, a “system”, to act just like a machine so as to attain optimal efficiency. Scientistic thinkers hoped that such method would spread to the whole society and envisioned a technological utopia.
The author then draws an analogy between taylorism and Google’s pledge to “organize the world’s information”. “In Google’s view, information is a kind of commodity, a utilitarian resources that can be minded and processed with industrial efficiency”.
To do just that, Google’s algorithm aim at supplementing human intelligence to organize the web as relevantly as mathematics allow… And we, web users, evolve into restless information seekers. We don’t even have to research about something to understand it. We just google it and it magically comes to us. We get used to functioning that way. Our brains become Google-dependent. When we wonder about something, our first reflex is Google. And once we have found out and read a few lines about the subject we pondered, we move on to another hyperlink or search to quench our thirst. Constantly relying on this artificial intelligence, our own intellect becomes machine-like. It is not, like in taylorism, our workforce that becomes a mere component of a bigger technological system but our cognitional capacity, thereby growing dependent upon it. Our reasoning weakens as our access to knowledge grow… Besides, as Carr rightly points out, Google and other data-mining companies have an obvious in having users flicking through the web, giving away valuable bits of data each time they click on a page so that these companies can sell them back targeted ads.

Carr’s criticism is both biting and worrying, even if he admits that we need balancing the pros and cons embedded in any use made of technology. It tells us a great deal about potential dangers and invites to ensure that people preserve their ability form complex thoughts. Surely, the internet is flexible enough to serve that goal, especially if educational policies take these aspects into account and are adapted accordingly.