MySpace: A Revolutionary Link Between the People and the Cultural Industries (1/2)

The following article is an excerpt from a research paper I wrote in June 07 at Middlebury College.

Most online-social networks were developed with technical means in mind. In that respect, MySpace is first and foremost a commercial company that seeks to maximize its benefits through advertising. This commercial aspect has been proven even more central since the media multinational News Corporation, company of the Australian magnate Rupert Murdoch, bought Intermix, the group MySpace belongs to, in the summer of 2005. MySpace value was then estimated to US$ 327m. Why such a success?
By encouraging users to refer to popular culture, and by creating strong networks between the producers of pop culture and the consumers, MySpace is able to offer a segmented social space extremely convenient for advertisers, who massively invest in the social network: only in the categories “Fan clubs”, “Music” and “Entertainment”, there are more than 1 million users groups. The prominent place of popular culture on MySpace is facilitated by the technologies it proposes (streaming of music and videos) and the general organization of a profile page: user’s digital identities are performed through the extensive quoting of popular culture, and can easily be reduced to some aspect attached to it. In the same way Google developed a technology that enables advertisers to reach people with certain specific interests, MySpace can offer precious information about the sociological background of its users to advertising companies, since communities are organized around shared characteristics (demographics, educational background, socio-economical position but first and foremost cultural tastes).

In addition, by providing the cultural industries, and more specifically the music industry, with an exchange platform with consumers, it stimulates among the network social buzzes about this or that artist. Today, almost every music band has an official MySpace page. Through their pages, artists can easily make people discover their music and communicate with their own fan base to give information about new releases and tours. It is also very simple for an artist ‘x’ who considers an audience to be close to that of the band ‘y’ to get in touch with the fans of the latter. It is especially useful for small and amateur bands, which can use the networks of 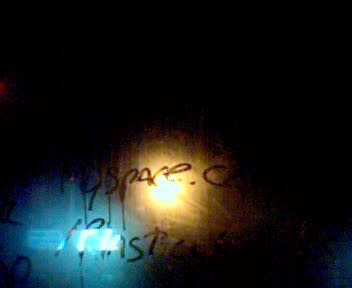 more notorious bands to expand their audience. And of course, there is always the possibility for horizontal interactions between users who are likely to discuss about their favorite singer, or to share music of a new band by playing their music on their profiles (their friend can click on a link and directly access the given band’s page). On this online network, popular culture fuels all kinds of social interactions.

Hence, MySpace locates itself at the intersection of both the cultural industries and the audience by proposing an innovative way of broadcasting popular culture. It surely serves the cultural industries in many ways since it has become a fundamental tool for promotion and communication. However, promotion is not purely organized top-down: the high degree of interactivity and the gratuity of access allow non-signed bands and amateur artists to find an audience. By a sort of boomerang effect, MySpace nourishes the cultural and entertainment industries. The evident example is that of the Arctic Monkeys, a British rock band whose fans posted some of their songs on MySpace, a move which helped the band to gain popularity worldwide. MySpace offers a form of cultural democratization in the sense that small non-signed band have basically the same means as rock stars, that independent filmmakers don’t need a big distribution company to find their audiences. This even has been the original use of MySpace ever since when it was launched, the first users were Californian indie Rock bands and their fans (Boyd, 2007). Indeed, this online social space, there seems to be much less discrimination than on physical markets where distribution of cultural products is more and more complicated in a sector very concentrated (in the music business, the “big four” major companies sells more than 80% of music worldwide which give them a significant power on distributors). As a matter of fact, MySpace recently announced an agreement with the new independent labels licensing agency to sell their music online, thus showing its will to encourage independent and emergent artists.

In the end, the fact that simple users have such an influence on promotion and eventually the commercial success of the artists represented on MySpace brings questions about the traditional role of cultural media as critics and selectors of popular culture. This might not be surprising for who has observed discourses of fan web communities about popular culture, in that they have long contested traditional cultural practices and mainstream aesthetics (Jenkins, 1992). However, social networking websites such as MySpace have completely shattered the structures of the earliest versions of web-based social interactions and the phenomenon is different in that, often times, a very wide audience can praise a particular artist before the “traditional critics” have had a single word to say about it.

Photo on Flickr by m-c under Creative Commons License.