The battle that right-holders have been waging against P2P users has proved largely unsuccessful so far. In the US, the methods used by the recording industry’s lobby (RIAA) to track down “pirates” are put into question; in France, the penal sanctions provided by a 2006 Act on author’s rights have had no effect in stopping illegal downloading, and the digital music market is still developing extremely slowly (8% of total music sales). 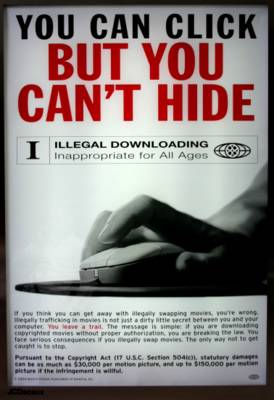 This year in France, Sarkozy’s government claimed to have found the solution to this endemic problem with the Olivennes Report, an agreement among right holders and Internet Service Providers named after its main author (former head of FNAC, France’s biggest record retailer). The report, which is currently being translated into a bill, would create a new independent authority in charge of dealing with internet copyright infringements. Alerted by right holders who would be given the right of monitoring internet networks to collect personal data about wrongdoers, this public authority would send warning messages to internet subscribers accused of illegal downloading. If other copyright infringements were to be observed, this authority could order ISPs to suspend the incriminated user’s internet access for a duration of up to 12 months (it is only if the user appealed the decision that a judge would be called upon)!

But late April, as the French government was starting to work on the bill, the European Parliament voted a virulent report on Cultural Industries (the Bono Report, named after its main author, a French MEP). This non-legally-binding resolution condemned the French so-called « graduated response », exhorting the European Commission and the Member States to:

Recognize that the Internet is a vast platform for cultural expression, access to knowledge, and democratic participation in European creativity, bringing generations together through the information society; (the EP) calls on the Commission and the Member States, therefore, to avoid adopting measures conflicting with civil liberties and human rights and with the principles of proportionality, effectiveness and dissuasiveness, such as the interruption of Internet access. »

This came as a blow for Sarkozy’s government. But in spite of this downfall, the Culture Minister Christine Albanel soothed rights holders saying that she would push the bill through Parliament before the summer anyway.

Not surprisingly, the proposal was also seriously weakened earlier this week by the preliminary report of the State Council (Conseil d’État), a court of senior jurists that advises the government on legislative bills and also acts as France’s supreme court for administrative law. It suggests that the State Council will redraft the bill, adding a fine of 5000€ maximum as an intermediary sanction (before the removal of the internet access), so as to be able to modulate the degree of the sanction and take into account “the gravity of the copyright infringement”. This new measure aims to ensure that the law respects the constitutional principle of the individualization of penalties. However, this also means that the public authority will have to give a closer look to individual cases, which will slow the procedure and increase its functioning cost, thus undermining its effectiveness in fighting illegal downloading.
Additionally, it is worth noting that for various other reasons the bill has received negative notices from the national telecom regulator (Acerp) and a number of French deputies. According to several sources, the National Commission for Information and Liberties (CNIL) will also give a highly critical opinion on the project.
In the face of all these troubles, it seems that the Government will now postpone the legislative procedure until the fall, much to the despair of right holders.

But today, I came upon this interesting article on the Electronic Frontier Foundation’s website. At the moment, the US, Canada, the EU, Japan and other countries are negotiating a trade treaty outside of the WTO framework. According to the EFF, a leaked memo indicates that the current draft for this Anti-Counterfeiting Trade Agreement (ACTA) mentions, among many other things, “new legal regimes to encourage ISPs to cooperate with right holders, criminal measures, and increased border search powers” (further information on this memo here). It is still very unsure what this treaty is all about, but what is for certain is that treaties are superior to the Law once they have been ratified. If the ACTA came into effect, it would be a pretty insidious way to harmonize legislations on a rather conservative standard.
All this indicates that worldwide intellectual property lobbies are striving to maintain the status quo on cultural rights, even if it means undermining civil liberties. Instead, they should put as much efforts into thinking of other ways to reward artists and cultural industries in the age of the internet.