The Media Under Control ?

Here is a short review of a conference entitled “The Media Under Control” that took place at Sciences Po last thursday. The first speaker was Hervé Bourges, former director of the public TV network (France Television) among many other things. He gave an interesting account of the way French politicians, ever since De Gaulle’s presidency in the 1950’s, have exerted a strong control over the media (all State-owned) until the complete deregulation in 1986.

Then came Alain Finkielkraut, a rather conservative philosopher, who spoke not about the control of politicians over the media, but about the control of the media over politics, which he argued was more dangerous… He referred to Tocqueville’s Democracy in America and his concept of the “tyranny of the majority”. 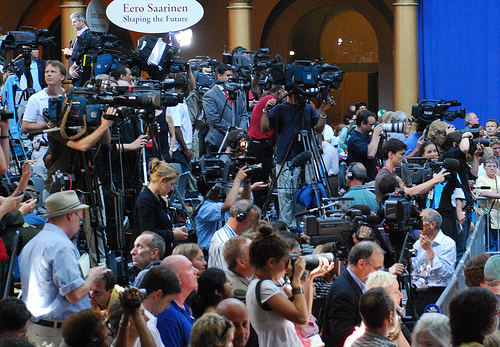 According to him, the general public exerts an absolutist power over the media. Reality TV as well as new satirical political talk-shows and other programs of the sort are all reminiscent of a growing “trivial-is-good” trend that is shaping our culture… He went very far off, saying that this form of egalitarianism, the implicit acceptance that everybody’s opinion is of the same value, was even favored by new technologies. Delving shortly into this argument, he called the internet “an environment of horizontality”, saying that on the net everybody can call themselves a journalist. Facts don’t matter, it’s all about opinion, and everybody shouts out at the same time. He went on to draw a parallel between the anticipated secondary education reform in France, which will apparently consist in decreasing the number of lectures for high school students while developing cooperative projects and workshops. All this, according to Finkielkraut, involves that there is no more elite, no more authority. This renunciation of a top-down order is the “death of civilization” (!). This is what he said in a nutshell, and I strongly disagree with the paranoid look he has on the transformations of the media landscape. Of course, there are flaws. Journalistic deontology lacks in what is being reported online, sometimes even by well-established sources. But instead of discriminating the good and the bad, of looking for solutions to these deficiencies, Finkielkraut throws out the baby with the bath water without mentionning the huge opportunities that the internet offers. (About the education reform, well, 7 hours of lectures a day, with very few workshops and very little pedagogic exploration is not the best way to help a teenager to think by themselves nor to arouse their critical mind, which is of the utmost importance in the information society).

Finally, two journalists, Daniel Schneidermann and Rémy Rieffel, came up and talked about the links between big industrial groups (Bouygues, Lagardère, Dassault, Bolloré), main shareholders of France’s mainstream media, and President Sarkozy. The issue is that most of these companies depend on public contracts (road works, armament, transportation, etc), so that there is an obvious risk of collusion. I have to say it was really sad to hear the French media compared with Italian ones.

A feud over press freedom boils in France, The International Herald Tribune
The Rag Trade, The Economist
Sarkozy, the New Berlusconi, The Guardian
Battle for Le Monde Heats Up, Newser

Photo on Flickr by afagen under Creative Commons License.